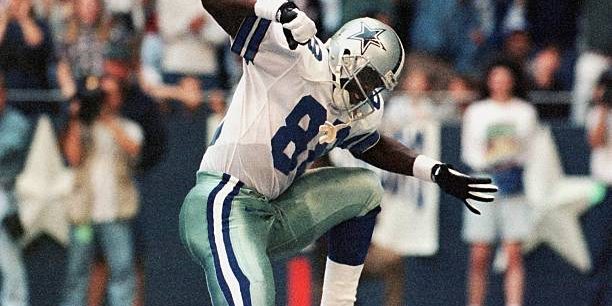 Michael Irvin. Does that name ring a bell? Well you may know him as a Pro Hall of Fame Athlete or as a Dallas Cowboys superstar. But did you know that his all-star football career began right here on our STA field? From the very beginning, Irvin felt comfortable with a football in his hands and knew that it was what he wanted to pursue when he grew up. When high school rolled around, Irvin made sure to be the best he could be on and off the field as he knew that it would set him up for success in his future. He firstly attended Piper High School but transferred, after sophomore year, to St. Thomas Aquinas as it opened many more opportunities for him. There, he took his team to States and allowed them to earn the All-State Title. Irvin graduated from STA in 1984.

For college, Irvin attended the University of Miami (1985-1987) and helped the Hurricanes to win a championship in his final year there. He was drafted early into the NFL by the Dallas Cowboys in 1988. With the Cowboys, he quickly rose to fame as one of the greatest wide receivers the Cowboys had ever had. He went on to win 3 Super Bowls with them and kept on playing the sport he loved in the NFL for another 12 years. However in October of 1999, he suffered from a severe spine injury caused by a tackle that temporarily left him unable to move.

After a full recovery, knowing could never play the game he loved the same again, Irvin retired from football with 11,904 receiving yards and 65 receiving touchdowns. After dropping out of the spotlight for several years, Irvin became a Network Analyst for the NFL and in 2007 was inducted into the Pro Football Hall of Fame. Hoping to have his son follow in his footsteps, Irvin brought his son to STA in 2015 to play football. Although Irvin became extremely successful, he never forgot his roots or his STA family. As we say once a Raider, always a Raider!